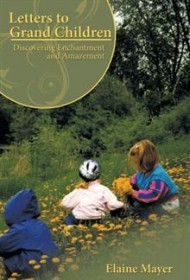 With more than a dozen grandchildren scattered from San Diego to Winnipeg, Elaine Mayer wasn’t content with the occasional visit. In 2004, she began to write group emails, sharing family news along with her take on spirituality and the natural world. Letters to Grand Children is a collection of short missives about births, deaths, weddings, vacations, holidays and nature, woven together by the author’s special blend of Catholicism, Native American wisdom and the eco-spiritual teachings of priest Thomas Berry.

Mayer calls all humans “Grand Children” and refers to animals as the “four-leggeds” and “winged creatures.” She prays to the Spirit of the Universe and ends most letters by “breathing peace and love” to her progeny. Without context, those messages can be confusing to the average reader, but explanations eventually unfold. More than halfway through the book, for example, is a lesson on meditation that describes Earth’s atmosphere as “one gigantic lung” and conscious breathing as a way to turn toxicity into peace and forgiveness.

The author worked as a librarian before retiring, which may explain her tendency to add random definitions, i.e “uniqueness (you NEEK ness; it means no other person is like you)”. [sic] It may also explain why her letters are heady stuff that at times resemble a lecture or a sermon more than a conversation.

Mayer is at her best when using little stories about everyday life that subtly reveal her spiritual approach. After the season’s heaviest snowfall in February, 2007, for example, she woke to a “street of gingerbread houses dressed in white” and played in the snow, enjoying “part of the magic that happens in our world.” But ultimately, Mayer doesn’t share enough about herself or her heritage to reach a broad audience. Instead, the missives are just as billed: correspondence that knits her far-flung family together.

BlueInk Heads-Up: May appeal to those interested in eco-spirituality and the work of Catholic Priest Thomas Berry.