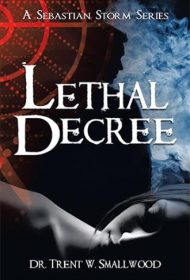 In the first of a planned series, protagonist Sebastian Storm overcomes a devastating West Virginia childhood to become a super-soldier who faces a vengeful enemy.

Storm grew up with a loving mother and abusive father, Jonathan, who apparently pushed his mother down a flight of stairs, killing her when Storm was 13. Dad hated that his son even existed, and the feeling was mutual. Shortly after Mom’s demise, Jonathan dies brutally, as his son exacts revenge. Older friends eventually take Storm in, recognizing his natural gifts and helping him develop superb fighting skills.

Storm excels in SEAL training, becoming “the ultimate soldier without equal,” with one exception: his fellow trainee, the hate-filled Tobias Teague.

When a drug cartel beheads Teague’s wife, he blames Storm for not preventing the murder, and Storm fears his wrath. “His fear was not in dying” but rather in a “long, painful, and purposeful” torture beforehand.

Currently, Storm freelances for Homeland Security, and Teague seems bent on world domination but is also obsessed with sending out henchmen to kill the hero. Ultimately, Teague plans to blow up a Berlin museum and, thus, “warrant the fear of the world.” Of course, Storm must stop it.

This action-packed story is filled with violence, befitting the genre. Smallwood also includes well-wrought, if over-the-top, sex scenes. Before the first such episode, he kills an evil man, to the immense gratitude of the man’s wife. In short order, she has a post-coital realization that he would not return to her: “He was a wanderer, a soldier, a nomad, a slave to a greater calling.”

The narrative can be overly wordy, often explaining its characters’ mindsets at length, rather than letting their actions speak for themselves. And it sometimes randomly shifts from past to present tense.

Still, Storm is an engaging character that readers will root for. With editing to tighten and polish the text, this story would provide a promising start to a testosterone-fueled action series.