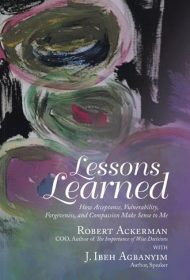 In Lessons Learned, Robert Ackerman, a former New York State government worker and now COO of a wireless infrastructure company, teams with J. Ibeh Agbanyim, an author, public speaker and organizational psychology consultant, to deliver a collection of stories from which readers are prompted to “draw their own conclusions.”

The result, however, is less about the stories than about Ackerman’s advice on the four topics comprising his book, enumerated in the subtitle. Many of Ackerman’s personal anecdotes are frustratingly truncated.

For example, in one chapter, the author starts to describe the impact of losing his father but stops after a single paragraph, stating that recalling his dad chokes him up. Instead, he offers a moral about acceptance, noting that the loss has made him resilient. Referring to a trip to Morocco with his daughter, Ackerman reports that the locals invited them to carry a live snake. Rather than recount the exotic scene and presumably compelling dialogue, he simply writes (under the topic of “Vulnerability”): “It was terrifying and nerve-wracking, but we did it and had fun with the experience.”

Fortunately, anecdotes about other people—such as a worker at Disney World who offered a kind gesture to a young guest and Reginald Denny, a victim of police brutality in Los Angeles in 1992—are more thorough and satisfying.

Ackerman’s advice can be inspiring—for example, “The best lesson I have learned in life is to allow others to be themselves and express how they really feel without worrying about me judging them”—and the writing is generally strong. But the gap between the stories he promises and what he delivers is especially disappointing because his writing skills indicate he is capable of more.

Lessons Learned could have been an outstanding medley of moving narratives if the author had dug deeper, carrying us with him on his journey instead of giving us the CliffsNotes version. As is, readers will wish for a fuller offering.