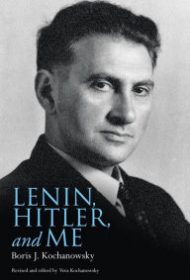 From a privileged life in Siberia before his family suffered fallout from the Russian Revolution to his harrowing traverse across Europe to escape the Nazis, Boris J. Kochanowsky recounts his inspiring story in this memoir, weaving the history of an era with a man’s indomitable will to survive.

Hoping to realize his dreams, Kochanowsky left Siberia at 16, pursuing higher education in Germany and subsequently a career in mining. But the onset of WWII ignited assumptions about his Jewish heritage, marking him for persecution. Over the next several years, he fled across borders seeking sanctuary among co-workers, acquaintances and churches while remaining mindful of those who took risks to save him. It was 1953 before Kochanowsky finally realized his lifelong goal of reaching the United States.

Following Kochanowsky’s death, his daughter Vera revised and edited his memoir, aiming to place this personal account within a broader historical context. English was her father’s fifth language, and she appears to have effectively addressed any grammatical and structural issues, as the story flows smoothly.

Several black-and-white photos add an intimate dimension, capturing family, friends, natural vistas and work in the mining field. A particularly poignant image depicts Kochanowsky’s return in later years to stand outside a tunnel entrance, the gateway into Holland through which he had fled Germany.

Kochanowsky incorporates humor to lighten his story’s intensity, including the comic incident of repeatedly losing a newly purchased hat and a clever but anxious moment of hiding in plain sight behind a police officer during his travels.

The author’s engaging read successfully showcases the fear triggered by the click of a rifle bolt and the life-changing circumstances brought on by wartime upheaval. This absorbing story, which creatively blends factual accounts with dramatic storytelling, will appeal to history buffs and those drawn to first–person perspectives that reveal life lessons of determination, self-preservation, human kindness and the pursuit of dreams.