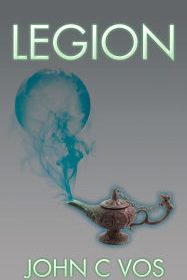 Author John C. Vos weaves a complex and detailed narrative out of a simple dream and a centuries-old premise in his debut novel Legion.

On the book’s back cover, the South African author explains that the idea for the science-fiction/fantasy thriller stemmed from a simple dream, one that saw him summoning a genie from a lamp. Vos took that basic idea and built a sprawling story about aliens, magic, personal tragedy and the struggle between cosmic forces of good and evil.

In Legion, the recipient of the magic lamp is Jim Hunt, a computer programmer thrown into a state of despair following the tragic deaths of his wife and sons. As he’s navigating grief and despair, he happens upon a lamp left in a crate of odds and ends belonging to one of his late wife’s relatives.

Instead of a genie, Jim summons Legion, a collection of five aliens trapped in the lamp by their evil brother, Wodri. In lieu of wish fulfillment, Jim is charged with saving the galaxy from Wodri’s evil designs of destruction and conquest. Jim’s quest sees him interacting with aliens and teaming up with Layla, a restaurateur who has to wage her own battle against her three wicked brothers.

The core of the tale offers some promise, and Vos does his best to spin a compelling story from these far-flung elements. He offers well-drawn characters and an imaginative flair that makes tales of evil aliens, magic lamps and intergalactic battles feel believable.

Unfortunately, the novel is hampered by several issues.  At more than 500 pages, the book fails to justify its considerable length, conveying a rambling feel that detracts from the heart of the story. It also suffers from writing mechanics problems, such as the use of conflicting tenses and spelling errors.

Still, the story can be engaging. Readers willing to persevere through some unnecessary stretches of text and overlook the grammar issues will find some rewards here.