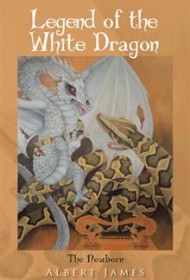 Albert James has written an exciting and futuristic fantasy tale, set on Earth and in the galaxy beyond.

When Sheena Steele accompanies her closest friend, famous ballerina Cherry Sheldon (a.k.a. Tishia Bach), to her performance in Jerusalem, she senses that they may be in danger, a suspicion soon confirmed. Tish’s performance is sabotaged, many lives are lost, and Sheena and Tish are subsequently detained by the tyrannical Emperor in the Temple of Solomon. They are able to escape, but not before Tish’s world and her innocence are shattered.

The two women must run from the Emperor, who wishes to possess the beautiful Tishia, and ultimately destroy Sheena. They must somehow get back to Atlantis, the only place that they can be guaranteed safety. As a result of suspected intergalactic terrorism, they are wanted fugitives on Earth, with a large bounty on their heads. Meanwhile, Earth’s government and infrastructure is collapsing, and violence and corruption prevail.

Legend of the White Dragon: The Newborn is a grand, epic adventure. The plot has many layers (sometimes too many), and at times can be confusing. However, the story is engaging and action-packed. Tish and Sheena are prone to misadventure, and their mishaps on the journey back to Atlantis provide constant excitement.

James delivers a full cast of characters, each with their own story to tell. The characters are complex and allowed to grow and change as the story moves along. Sheena’s journey is especially captivating. She shows such beautiful strength as she transforms throughout the story from the mistress of a politician to an epic hero.

Legend of the White Dragon: The Newborn combines political intrigue, religious prophecy, romance, sex, and action. The result is a sweeping adventure, complete with a shocking climax and breathtaking conclusion.