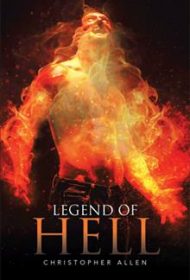 Driving on unfamiliar roadways in North Carolina on a rainy night, Freddie Johnson is traveling to meet his family when he swerves into a ditch to avoid hitting a woman… and wakes up in Hell. After meeting some legendary angels (Jophiel, Uriel, Michael, Raphael, etc.) who are there presumably to help him, the stoic “Army guy” quickly realizes his predicament: The only way out of Hell is through the frozen wasteland of Gehenna—and getting there takes four years! Before reaching Gehenna, however, he and his angelic crew must journey across a hellish landscape that includes crossing the desert of Purgatory and maneuvering through the forest of Suicide.

It’s impossible to critique this release without first mentioning the inundation of grammatical and formatting errors. There are hundreds of spelling and punctuation errors, confusing shifts in points of view, and no new paragraph breaks when a new character speaks. The jumbling together of dialogue coupled with the deluge of errors makes for an extremely challenging reading experience.

There are other less significant—but still important—flaws as well, namely the lack of any real character development or overall description. The read is made even more frustrating because of the lost commercial potential; paranormal fantasy fans that have made Richard Kadrey’s Sandman Slim saga so popular over the years would find more than a few elements of this story appealing: snarky lead character, brisk pacing, nonstop action, a dark undertone and looming apocalyptic backdrop, etc.

While the book has an eye-catching cover, unfortunately the contents inside don’t match its professionalism. This narrative requires revision before it will appeal to readers.