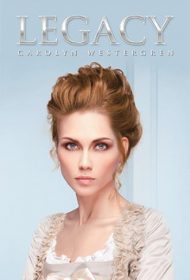 In Legacy, Carolyn Westergren tells the fictional story, based on true events, of Felice Gallagher, a successful madam in New Orleans and Texas.

The story begins with Felice’s birth on a stormy night in 1871. Her mother is a slave and her father a white plantation owner who dotes upon his fair-skinned daughter. But when her father dies and Felice takes a job as a governess, her dreams of marriage are spoiled when the man she loves realizes her mother was a slave.

Felice then turns to prostitution, working in a New Orleans bordello where she quickly accumulates wealth and the knowledge she needs to establish her own successful bordello business. The novel follows Felice through the up and downs of her life, her loves and losses, alongside the tumult of the Great Depression and two world wars.

Westergren creates a convincing portrait of the glamorous but dangerous life of a madam. These sections are detailed and convincing, with strong descriptions of the inner workings of her business, from catering and laundry to bribing local politicians. But this success is undercut by the novel’s uneven pace. Dramatic events—a shooting, a lover’s death, a key character’s admission into an insane asylum—happen quickly, yet there are long, repetitive sections connected to Felice’s business dealings.

Felice and her adopted daughter are both of mixed race but pass as white, and this repeatedly causes problems for them, particularly in the novel’s final sections, which take place after Felice’s death. At this point, entirely new characters appear in a legal process concerning miscegenation laws and Felice’s estate. Although related to the theme of discrimination, this is an awkward and unnecessary addition to the story.

Readers will also need to overlook the many proof-reading errors found throughout this lengthy novel.

Overall, the story has potential, particularly because of the fascinating true material that inspired it. But it requires plot revision and greater polish to appeal to a wide audience.