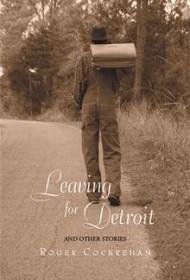 This is a collection of novellas, short stories, poems and songs, most with dark themes and often addressing racial inequality.

The book’s title reflects the name of three novellas (“Leaving for Detroit,” Parts I, II and III), each loosely linked. The story begins in 1937 when young Sam Carter leaves his pregnant wife in Georgia to find work in Detroit after losing his cotton crop to the drought and boll weevil. He hitchhikes to Knoxville, where he expects to see his cousin Willie, but Willie has already left, after hearing of work in Chattanooga. And so Carter makes his way to Chattanooga.

Carter soon makes a name for himself in Chattanooga as a musician. But he’s a handsome man with an eye for the ladies, and the future does not bode well. The stories continue as various characters’ lives unfold over the decades and eventually come full circle on a train to Detroit.

The novellas are central to the collection and are thoughtfully told with well-drawn characters who generally live hard but satisfying lives. Roger Cockreham doesn’t let his characters off easily, nor does he shy away from the ugly realities of bigotry.

The short stories are also well written, but sometimes fall short in the craft of storytelling, with the author relying on the narrator to tell what should have been shown. In “Pacific Coast Highway,” for example, a man is a suspect in his girlfriend’s death, though it is unclear to anyone what really happened. At the end, the narrator reveals the truth as known only by the real culprit. After otherwise compelling storytelling, it’s a letdown to learn the facts this way, rather than revealing them through plot.

The occasional songs have a down-home feel, and the poems, generally placed between stories but also within them, tend to the melancholy and reflective.

By and large, these are gritty, provocative stories. Many, particularly the novellas, should prove satisfying to a variety of readers.