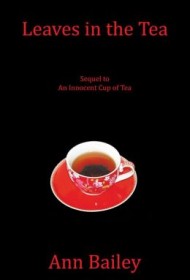 A sequel to a previous novel, Leaves in the Tea is written in the style of Maeve Binchy, wherein each chapter is almost a short story by itself, yet the characters know and interact with each other. While the novel begins well, ultimately the story becomes confusing and the characters never gain necessary dimension.

The first story is engaging and interesting, as protagonist Will’s father is murdered and facts come to light about who is responsible. Readers learn that Will’s stepsister, Rosie, and stepmother have perpetrated the murder and subsequent cover up. When Will and Rosie marry, they must move the buried body in order to sell their home. This plotline is easy to follow and suspenseful, well worth reading.

After 48 pages, however, the author switches gears and writes confusingly about at least a dozen other characters, three who separately drown due to the others’ negligence in monotonous succession. The book becomes a mishmash of characters and plots, all of which are somehow related to each other, though readers would need a chart to track them all. The characters seem to sleep with each other in every possible combination and plot revenge against each other, yet none of their actions has real motive or depth.

The book is punctuated in a British style, with commas and periods placed outside quotation marks, such as “‘I heard she drowned recently in a lake’, Pat said…” This may be disconcerting to American readers. Additionally, the author misspells HIV as Hiv throughout the second half of the book.

The book has great potential, if only the later storylines were as clear and interesting as the first one. It is also uncertain if the novel is meant to be a romance or suspense story. Unfortunately, neither genre is successfully achieved.