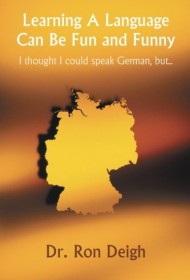 In this slim volume, Dr. Ron Deigh, a veterinarian, attempts a clever twist on the Stranger-In-A-Strange-Land literary staple by injecting language lessons into the mix. Trying to navigate double meanings, slang, dialect, and complicated grammar rules while also living life as a befuddled ex-pat has charming possibilities.

Unfortunately, the potential gem remains hidden as Learning A Language Can Be Funny fails to deliver on its potential.

Deigh spent seven years stationed in Germany with the U.S. Army and married his German wife there. He divides his book into a series of short vignettes about his gradual command of the German language, including embarrassing social missteps and the awkwardness of near-miss translations. This could be delightful. One of the best anecdotes concerns him not remembering the meaning of the word Fähre one night on a lonely stretch of road with limited visibility. Only as he slammed on his brakes at the last minute did he remember it meant “ferry.” He had driven onto the empty launch and nearly gone straight into the river.

Unfortunately, Deigh doesn’t quite know how to make all the elements in his book cohere. He writes instructionally of vocabulary and grammar, but the book isn’t really a language primer. And while he seems to be aiming for a creative narrative in which he seamlessly weaves those language lessons into his misadventures in everyday life, his writing is stiff and lacks the kind of warmth and connection that would engage readers. Outlining his anecdotes in broad strokes, he fails to bring them to life with telling details. There could be an entire short story in how he met, wooed and married his wife when neither spoke the other’s language, for example. Yet he simply states it as fact and moves on.

While Deigh no doubt has many tales to tell, as written here they feel incomplete and never fully deliver on the promise of his amusing conceit.