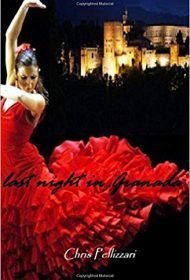 Last Night In Granada is a short, literary novel (arguably a novella), that uses an engaging, at times hallucinogenic, slipstream structure to convey one man’s love for a foreign city and the romance he once had there.

Chris is 30, depressed and neurotic, recently jobless and suffering from panic attacks. Most importantly, he can’t sleep. Abusing sleep medications, he finds himself in a dream-like state populated by his memories of Spain (most importantly, Granada), but also colonized by his own macabre imagination (more than once he imagines people trying to kill him). Two recurring motifs act as anchors: first, Chris’s veritable obsession with the poet Lorca, whose frequently quoted works act as a sort of cypher of Chris’s feelings; second, his fixation on Vera, the girl he once studied abroad with in Spain, a relationship that was always at the intersection of desire and decay.

The story is largely formless, flowing with an almost cinema verite aesthetic through a series of vignettes from the narrator’s decade-previous experiences in Granada. They don’t necessarily ratchet tension or propel a plot, but instead provide a phenomenological rendering of Chris’s experience. As such, some may feel the story is aimless; whether it pays off provides a sort of Rorschach test, dividing readers by their individual tastes. The themes—finding yourself abroad, lost love, and crippling neurosis—are relatable and lovingly rendered. And the culmination, the heartfelt wishes Chris conjures for Vera, are mostly sweet and possibly a little obtuse, not unlike Chris himself.

Realistically, little happens over the course of the tale, with a lot left unsaid between the lovers and much to be teased from the subtext. But the story is elevated at every turn by Pellizzari’s confident, stylish prose, relatable and authentic characters, and enthusiasm for Granada (and Lorca), which is irresistible.

Ultimately, Last Night in Granada delivers a gift to readers—the very thing Chris wishes he could achieve for himself: to be transported.