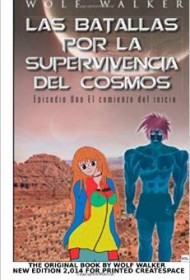 This book is the first of a trilogy that leans toward a softer, more entertainment-driven science fiction, rather than the more introspective offerings of the genre that critique society and politics, such the works of H.G. Wells or Ursula K. LeGuin.

In the depths of the cosmos, the Ollac clan prepares for combat. While their world is ravaged by war, a never-seen-before dark force begins to awaken. Keeping to their ancient tradition, the family holds an election process to crown their warrior princess, a beautiful young woman who, according to prophecy, will find the chosen one and, with him, return balance and peace to all universes. However, sometimes prophecies are wrong.

The struggle between good and evil is one of the most recurrent themes in fiction, and in science fiction it can present itself all the more innovatively. Indeed, this novel provides a surprising twist that is a highlight in the storyline.

However, the book presents several obstacles to enjoyment. Science-fiction fans, a group that is customarily forward-thinking, will find the author’s old-fashioned treatment of women a disappointment. (For example, the warrior goddess, Cristal, falls head over heels in love with Dronag, the chosen one, and abandons the purpose of her own mission.) In addition, the text requires in-depth editing. Lengthy paragraphs, which often continue for several pages without punctuation, turn what could have been a pleasant read into a cumbersome and difficult experience. The misspellings, constant repetition of ideas, unjustified changes in the narrator’s voice, and improper use of tenses also hamper comprehension.

Only after a thorough copyedit and a parsing down of the long paragraphs (which are a symptom of poor organization of the information at hand) might this novel be of interest to undemanding sci-fi fans – particularly those who aren’t seeking socio-political analysis about the world in which we live.