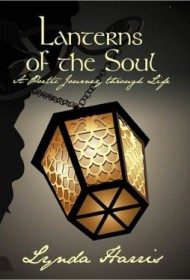 Lynda Harris, mother of three and grandmother of seven, has written a large book of poems that date from the 1960s through 2010. Each of the book’s five sections is arranged in roughly chronological order, giving a helpful sense of organization to this tome.

After the Introduction, the titles of the first four sections begin with “A Lantern on” and end with “Love and Family,” “Faith, God, and His Creations,” “Man’s Mortality,” and “Philosophy, Life, and Self.” The last section is simply titled, “Ending Lantern.”

While the poems generally lack surprise, there are pleasures to be found, especially if readers find traditional rhythms and rhyme patterns soothing. The poem “The Farm,” for example, might remind one of the feel of 19th century poetry such as “Twas the Night Before Christmas” in its diction and sing-song pattern: “Down the stairs we hurried / And hid behind the door / To glimpse the milk truck in the lane— / ‘Twas what we’d wakened for.”

A fair number of poems are addressed to God, such as a longer piece set in four-line stanzas titled “Letter to God.” These poems tend to wrestle with the timeless question of a compassionate and all-powerful God’s seeming indifference to human suffering: “Each sorrow makes me question, / Though I know it’s not my place, / You could have interceded / With Your instant saving Grace.”

Some poems contain imagery that, while not original, is achieved with a lively tone and a pleasing iambic meter, as in a darker somewhat Dickensian poem, “Lone Beggar Man,” which sympathizes like this, “The jagged street with broken glass / Is hard on shoeless feet. / The puddles, filled with mud—alas!— / Accommodate the falling sleet.”

This is the work of a fluent writer. While somewhat predictable, the poems gracefully reflect the everyday concerns that many readers share and will appreciate.