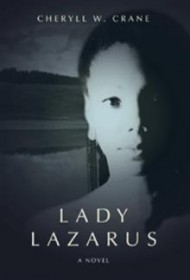 This tale of embattled African-American womanhood reads as though it were under the spell of Alice Walker and Toni Morrison. While California writer Cheryll W. Crane exhibits neither the complexity nor the memorable prose of those masters, Lady Lazarus glows with redemptive drama. A playwright, Crane shows high promise as a budding novelist.

Her troubled heroine is Mattie Moon of Eloise, Illinois, “a heartbreak town.” She is abandoned at age 9 by her beloved father and impeded by her mother, a fanatical Baptist possibly in the grip of madness. Like many melancholy children, Mattie takes refuge in books, performing brilliantly in school. But her life is derailed by two out-of-wedlock pregnancies, trauma and despair. Does Mattie, too, bear the seed of insanity? Perhaps, but she also has a guiding spirit — the mysterious and wonderful Stranger Woman — who materializes only at the bleakest times. Early on, we learn that Mattie has come close to committing a terrible act of destruction. But for wise Stranger Woman, she would have done the deed.

Here she is, on the brink of committing the ultimate family tragedy: “Death got my jacket from the closet. I put it on and woke the children from their sleep.” This is nice, terse writing — nothing wasted. En route to a bittersweet finish, Crane (a mother herself) vividly describes the pains of childbirth, Mattie’s crushing fear of abandonment and the dicey relationships between men and women. “The woman at a man’s side knows his character,” she writes, “or its absence.”

This is a carefully observed novel, one the late Sylvia Plath, from whose renowned 1966 poem Crane seems to have taken her title, would likely approve. It is a tale steeped in terror, buoyed by miracles. It is good to know that the author is at work on novel number two.