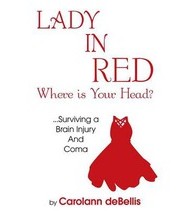 In January of 1987, Carolann deBellis was en route to New York with her family to see her brother in his first Off-Broadway play when the car she was riding in slid on the ice and was broadsided by a van on the Jersey Turnpike. Carolann was by far the most seriously hurt, with a closed-head injury that left her in a coma for ten days, among other injuries. She writes of the aftermath in her memoir, Lady In Red Where Is Your Head.

It is less a narrative than a collection of journal-type notes from the relatives who closed ranks around her during her early recovery, and later from Carolann herself. Family photos are included, as are pages of inspirational quotations from famous names, such as George Bernard Shaw. Many are unattributed because “I either heard someone say it or read it somewhere and I didn’t remember who wrote it.”

Carolann is donating 10% of the book proceeds to the National Head Injury Foundation and Magee Rehabilitation Hospital, where she was treated. But while she wrote the book to help other head injury victims, it’s hard to imagine them deriving much comfort from her story. Many of her inspirational quotations are repetitious and prosaic, and however much we cheer her recovery, her lack of insight detracts, as do frequent errors in spelling, punctuation and grammar. Her habit of using all capital letters for emphasis is also jarring. For the audience she’s hoping to reach in particular, Lady In Red would make for a difficult read.