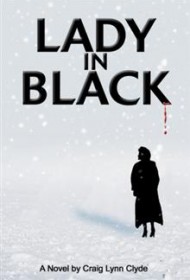 The novel’s prologue finds Detective Sgt. Jake Samuels of the Seattle Police Department on a plane to Paris. A female companion sits beside him, but Jake’s thoughts turn to a dead woman from his past. The story flashes back to describe a girl’s coming of age, marked by molestation at the hands of her ballet teacher, then forward to Jake’s partner on the force, Frank Valentine, receiving an urgent call. Frank’s wealthy stepbrother has been murdered, and Jake insists on joining the investigation.

Soon bodies pile up, the work of a femme fatale known to all her victims, who greets them with the line “First … we dance” and seduces them before plunging a stiletto into them. As Jake and Frank investigate, Jake begins to fear the culprit is someone very close to home.

The front cover of Lady in Black notes that it is based on characters created by another author, Marsha Casper Cook, and this mixed pedigree shows in the novel’s choppiness. The narrative takes frequent disruptive detours, many lasting most of a chapter, to deliver large chunks of the characters’ back stories. The plot also is haphazard; it reads as though Clyde, handed these characters, is struggling to come up with situations and obstacles for them to face.

The twist that concludes the novel is genuinely surprising and potentially intriguing, but it arrives with no foreshadowing or basis in what has gone before. Clyde’s writing style tries for inventiveness but frequently comes across as strained: Jake’s boss, for instance, “wasn’t in the best shape anymore to keep pushing his internal thermometer up around the supernova category.”