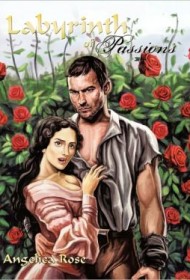 Even though it features the traditional 19th century romantic duo of a rakish viscount and a beautiful Spanish maiden, Labyrinth of Passions is definitely not your great-grandmother’s, let alone your mother’s, romance.

First of all, there are the sex scenes, which are so graphic they could serve as a how-to manual. That’s not to say they’re pornographic–they are tastefully described and well written–but readers who like their romances to end with a steamy kiss at the bedroom door will be shocked. Repeatedly.

Fortunately for traditionalists, the plot is tried and true. Lady Isabel De Carballo is plucked out of the convent where she was raised in order to marry Viscount Lucas Merewether. While Isabel longs for romance, Lucas has vowed never to love again after being betrayed by a former fiance. Nor does he plan to be faithful to his cloistered bride.

Tutored by a prostitute who joined the convent, Isabel maps out a seduction strategy to change her new husband’s mind. Yet even though he is wildly attracted to her, Lucas refuses to pledge more than his body to Isabel. Although a scene in which Isabel’s strategy backfires is poignant and expressive, the seduction-retreat scenario repeats itself for far too long, forcing an exciting abduction/murder/mistaken identity story line to be wedged into the last 50 pages of the book.

Pacing problems aside, Labyrinth of Passions has much to recommend it. The plot is imaginative, the sex and romance ring true, and the characters are likeable. And in a genre that attracts inexperienced writers, Rose’s polished prose stands out.