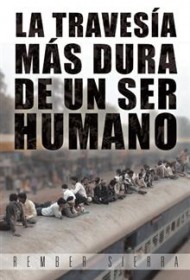 This is the compelling autobiographical account of an undocumented immigrant’s voyage from Central America to the United States. Author Rember Sierra, who was born in 1988, has chronicled his voyage from Honduras, through Guatemala and Mexico, and finally to the U.S. because: “No one knows what suffering people from Central America go through in order to reach the United States; only someone who has lived through it can describe how much one suffers on this journey.”

While this sentence reads clearly translated into English, it is actually riddled with spelling mistakes in its original Spanish, which is typical of the book. Words are occasionally phonetically spelled; accent marks are missing; country names aren’t capitalized, and sentences sometimes begin with lowercase letters and continue for pages. If this were fiction, one might think the author is writing in a naïf literary style, but given that Sierra’s biography says he only finished primary school before he began working, it appears that he might have written the book without any editorial assistance.

Despite the book’s grammatical mistakes, Sierra deserves accolades for his literary efforts and courage, and the content is engaging in its description of human survival. In cultural terms, this story recalls the bestselling nonfiction book Enrique’s Journey by journalist Sonia Nazario, as well as the film Sin Nombre (Nameless) written and directed by Cary Joji Fukunaga, also about a migrant’s journey from Honduras, with several scenes, as in Sierra’s account, set on the infamous “death trains” where migrants travel dangerously perched on carriage roofs.

This book as it stands would likely only interest a handful of academics, social workers and policy makers. It would take a dedicated editor and possibly a ghostwriter to rework it for a general audience. Ultimately, however, the author is to be congratulated for his determination and for providing this vivid, if challenging, chronicle about the harrowing journey that thousands of immigrant children make alone each day.