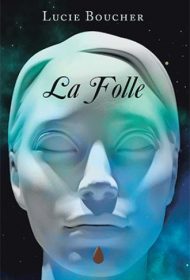 In La Folle, author Lucie Boucher relates a devastating and horrific story of systemic abuse within a family. The back cover calls it “a work of fiction,” but it reads more like a memoir.

The story, told from the point of view of Henrietta St. Bernard, recounts her growing up in a large French-Canadian family that relocated to New England when she was not yet a toddler. The narrative includes recollections of pleasant family holidays, but most of the book chronicles beatings and sexual assaults perpetrated by Henrietta’s father and further abuse by her siblings, as well as her mother’s efforts to cover it up and keep up appearances. In one scene, as her father rapes her, with her mother in the same bed, her mother urges Henrietta to be quiet, for fear someone will overhear them.

In later years, Henrietta escapes and begins to stick up for herself, but she describes visits to various family members that inevitably end with her being victimized.

Whether truth or fiction, this is a punishing story to read. The scenes related are brutal, and the story lacks the plot or character development typical of novels. The first-person perspective makes the abuse feel immediate and shocking, but Henrietta often rambles, and she also addresses readers directly. At one point, she writes: “In this life your family can affect your childhood in terrible ways … Don’t let them!” In another aside, she states: “I wrote about that in another chapter.” Such moments take readers out of the story and further confuse the issue of whether this is truth or fiction.

La Folle might help some readers who have endured the worst humanity has to offer feel less alone or perhaps be seen and validated. But as a novel for general readership, it lacks the elements of storytelling that compel readers to keep turning pages.