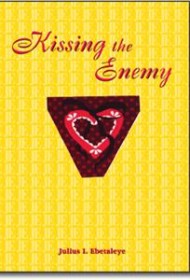 A member of the Royal Society of Literature in England, author Julius Ebetaleye has written a short book (108 pages) that blends suspense and romance in a slim, character-driven story.

While the introduction and first chapter are confusing and don’t relate to the rest of the story (characters are introduced here who are never mentioned again), in the second chapter, Ebetaleye creates two likeable characters in Jane Abass and Billy Bade, who appear in the remainder of the book as the main focus of the storyline.

The story is set in Lagos, Nigeria. Jane, an underpaid yet beautiful secretary, meets Billy, the manager of a cocoa farm and several companies inherited from his father. When the two embark on a romantic evening, things take a dangerous and troubling turn when a violent and traumatic event occurs.

Despite the likeability of the characters, the plot suffers from several flaws. The traumatic event is treated far too lightly and with an emotional distance from both characters that will frustrate readers hoping to feel connected and engaged with the author’s protagonists. The same is true of a similar plot development later in the story. In addition, the story fails to explore the ramifications of these two events, which stretches the believability of the plotline.

Ebetaleye offers brief but interesting glimpses into life in Lagos that leave the reader wishing for more description of what appears to be a beautiful area. In addition, the story is occasionally marred by verb-tense errors that make it difficult to determine when events take place.

In sum, while this story of suspense, romance and intrigue holds promise, further revision is required for the novel to realize its potential.