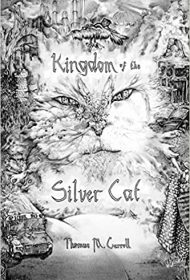 A routine morning ride on the school bus plunges 15 youngsters into a mysterious world in this engaging debut fantasy by Thomas M. Carroll.

On a seemingly normal day — except that some students were troubled the night before by bizarre dreams — the old school bus in Annaberry, New York, dubbed “the yellow beast” by the children, suddenly veers off course. A bright blue light flashes in the atmosphere and the children, ages 8 to 13, find themselves in a rather pleasant, earth-like meadow. But the bus won’t move, cellphones are useless, and the driver, Ben, heads off to look for help.

Adjusting to their mysterious new environment, the children begin to experience surreal powers: Gabrielle can fly on her skateboard; Ted can make music by waving his hands; Timmy begins to spout words of deep wisdom, among others. When Ben fails to return, the kids begin to explore in small groups, taking trails that appear and disappear, shadowed by huge predatory birds.

One group encounters copper-hued fairies whose leader alerts them to the dangers they face. Yes, they have new, remarkable abilities, but with each gain comes a weakness. And an evil chieftain, Sidtarr, covets their gifts and has sent his giant birds, the rarewar, to capture them. The only refuge is within the Kingdom of the Silver Cat, but to gain the Silver Cat’s assistance they must bring him a rare sapphire fruit.

Carroll’s intricate fable is based on perhaps every child’s wish to be transported, not to school, but to a magic land beyond the blue. The cast is large and diverse in age, color, and ethnicity, and it can be difficult to follow so many. But charming drawings by Jackie Carroll help distinguish them, and other illustrations by Linda Huang lend atmosphere to the overall proceedings. Carroll offers lively dialogue and realistic depictions enliven his story.

Kingdom of the Silver Cat is envisioned as the first of a series to be called The Sapphire Fruit Chronicles. His target audience of older children and young adults will surely welcome the sequel.