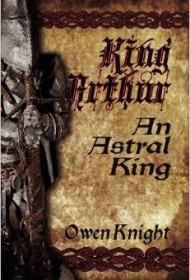 King Arthur: An Astral King is an unusual take on the King Arthur legend, drawing from the earliest sources. It begins prior to Arthur’s birth and extends into his relationship with Merlin, his friendship with Sir Kay, and his initial ascension to kinghood. Along the way, there are tournaments, political talks, sexual conquests, and a hint of the later Arthur, from Camelot to Avalon.

Knight’s audience is Arthurian aficionados, and his take is just different enough to generate some interest. There is no hint of the later romance-period legends of Arthur, no Lancelot or love triangle, and a Guinhwyvare (Guinevere) who appears only at the end. The author’s reliance on earlier conceptions of Arthur may be disappointing to readers more familiar with the modern interpretations.

The book opens with dry descriptions of British history in the age of Arthur’s father, and quickly devolves into extensive lists of who begat whom. Arthur himself doesn’t appear until page 60 and spends most of the story as a teen verging on manhood.

While this could be a refreshing approach, the story itself simply doesn’t deliver. The book isn’t broken into chapters; it takes place all in one long chapter with an odd introduction about the spiritual importance of names that seems meant to explain the title of the book, but it’s not clear how Arthur, in the narrative, is an “astral king,” and the introduction does little to clarify that description. There are wizards and druids who cast no spells, politics without intrigue, virtually no romance, and a narrative where surprisingly little ever actually happens. In the end King Arthur: An Astral King simply fails to engage the reader enough to be satisfying as either folklore or fiction.