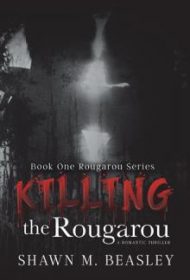 Set in Louisiana and Texas, this story describes generations of romances—primarily within two families—until frightening appearances from a figurative swamp monster destroy the calm.

This “monster” is a mortal man named Michael Paul Markem, although he’s nicknamed “the rougarou” (a legendary werewolf creature). A pedophile and serial killer, he’s introduced in the prologue, but doesn’t appear again until Chapter 13. Criminally insane with a fondness for dumping his dead victims into waterways, Markem lurks in the background of the many happy love stories within the main narrative.

His near-fatal attack on a five-year-old-girl named James Gauthier affects the victim profoundly, along with her immediate family members. After being convicted of James’ rape, sodomy, and attempted murder, Markem waits in prison until he can “reunite” with the girl upon release.

Another family, comprised of Cat Thomas and his sister, interconnects with the Gauthier family as James grows into a young woman, and by default with Markem. Additional generations of family members, friends, and in-laws make lengthy appearances, although most are unnecessary.

The central story is engrossing, but the book over-explains (full paragraphs focus on irrelevant geography, history, and even TABASCO sauce), provides blatant foreshadowing, and replays scenes from another character’s perspective without adding information. Bloated writing detracts from the primary romance (between James and Cat) and the story’s suspense.

This is not a perfect book, but there’s a gripping story at its heart—one that holds much promise. Divided into three parts and intended as the first in a five-part series, Killing the Rougarou makes an interesting, if ultimately flawed, introduction to the Gauthier and Thomas families.