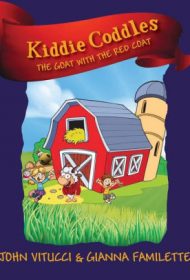 In Kiddie Coddles: The Goat with the Red Coat, Scarlett learns a lesson about appreciating her younger brother Jackson, through the magic of a family heirloom—a stuffed goat doll.

While visiting their grandparents’ farm, Scarlett and Jackson are helping their grandfather clean out his attic when they discover a box containing a goat horn, and a stuffed toy goat named Kiddie Coddles. Jackson takes the horn, and Scarlett takes the doll; Grandpa explains that he and his sister used these items when they were children, and that the horn can be used to ask a living, moving Kiddie to grant a wish.

Despite his sister’s poor treatment of him—making fun of his fears and otherwise belittling him—Jackson blows the horn and, through Kiddie, generously grants Scarlett’s wish to talk to animals. The disbelieving Scarlett suspects a trick by Jackson, however, and wishes aloud that he were never born. Kiddie grants this wish, and soon Scarlett misses her brother, appreciating him much more once Kiddie reverses the wish.

The book has plenty to keep kids interested, from mysterious attic treasures to talking animals and dolls. Unfortunately, at 47 pages, the book is far too long and dense for a picture book, and often several text-heavy pages pass before an illustration appears.

While the book’s mostly color illustrations are vibrant, they lack consistency: Sometimes the characters are featured with wide eyes and cartoony grins; other times, they are drawn in very different styles; even Scarlett’s hair color changes in several instances. Add to this some noticeable computer-aided repetition of image elements, and the occasional error (a pig with one green eye), and the effect is often distracting, rather than enhancing.

For young children with the attention span to stay with it, Kiddie Coddles: The Goat with the Red Coat provides a fun read, which will have a greater impact for readers with siblings. The length, however, will likely prove a stumbling block for many.