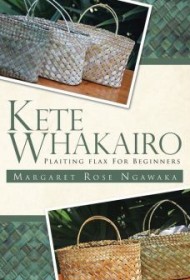 A kete whakairo is a decorative tote bag that would look perfectly at home in contemporary wardrobes. Handmade in one piece from local flax, a kete whakairo is shaped through a traditional method called raranga. Raranga differs from weaving, in which horizontal strands are threaded over and under vertical strands. Raranga is worked on the diagonal and relies on hands and fingers rather than shuttles and looms. The process is more like braiding (or “plaiting”) than weaving.

As the author notes in her brief but informative introduction, raranga was used in traditional Maori culture to create containers (kete) for many purposes. As New Zealand became colonized, pre-made baskets, bags, and suitcases became available and there was little need for the Maori to create their own. Currently, however, there is a movement in New Zealand to recapture the art of raranga, and techniques once passed from Maori mother to daughter are taught in workshops open to all.

In this spirit, Ngawaka offers her book: to pass along some of the methods she has learned.

Both author and principal photographer, Ngawaka has created a beautiful and well thought-out book. Its handsome color scheme, carried throughout, uses the colors of flax when it is newly woven (green) and when it has fully dried (a golden beige). Once in how-to mode, the author walks her readers through the process one easy step at a time, using her words and many color photographs, to demonstrate first the method of cutting and preparing flax leaves and then the plaiting of a kete whakairo right up to the last strand.

Ngawaka has created an engaging introduction to this handsome and approachable technique that will certainly appeal to anyone interested in basketmaking, traditional handiworks, the history of New Zealand, or crafting in general.