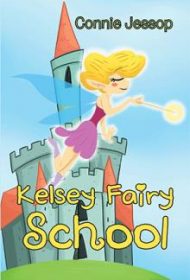 In this chapter book for young readers, a fairy learns to ask for help in order to protect her people.

Fedina is a fairy who, as the story opens, is thrilled to be headed off to her first day of fairy school. There, she’ll learn important skills like acrobatic flying, spellcasting, and baking—and she’ll finally gain some of the skills her older sister already possesses. Over the ensuing pages, Fedina makes a new friend, gains an admirer, and shows readers what each of the aforementioned classes is all about.

Throughout, readers are warned that when rainbows land on the village where Fedina lives, the fairies and all their buildings become visible to humans. This happens in the closing pages of the book, and Fedina attempts to rescue the town by casting an invisibility spell from the top of the highest tower—but she can’t reach it. Instead, she calls on her new friend, who is a better flier, and helps her remember the spell and cheer her to the top.

Ultimately, Kelsey Fairy School is a lesson in teamwork, but this plotline could have been better developed. While the story continually foreshadows the rainbow-related threat to the safety of the fairies, it focuses less on the importance of teamwork, which ultimately saves the day. Instead, it spends most of the time detailing classes attended by Fedina: vivid depictions of the drills and games played in flying class, for instance, and the process of cleaning the kitchen and preparing and decorating cakes in the baking class. As a result, readers learn little about Fedina as a person, which makes it hard for readers to feel an emotional attachment to the character. In addition, this ultimately lessens the threat of the rainbow and the triumph of Fedina’s solution.

Despite such issues, Kelsey Fairy School paints a colorful, upbeat world that could be unpacked with more emotional weight in future stories. The fun details about fairies—why they sprinkle fairy dust, for instance—should engage many young readers.