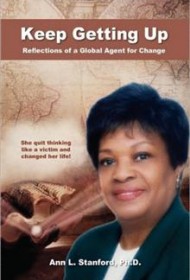 This compelling memoir recounts author Ann Stanford’s incredible journey from childhood in a one-room shack in Kansas to a remarkable diplomatic career, culminating in heading the American Consulate General in Lyon, France, the first African-American woman to hold this position.

Along the way, she details the challenges she had to face, primarily racism and discrimination. For instance, even though the Foreign Service had established, in accordance with Congress, a program to recruit and train minorities, because of a lack of support within the department, she had to fight to prove her worth and gain her diplomatic assignments. Throughout all her obstacles, Stanford has exemplified the title of her book: with perseverance and determination, she rises above even the most trying situation to succeed.

From an early age, Stanford dreamt of becoming a “universal woman” with an advanced degree and experiences in the greater world outside her isolated, rural community. Raising three children, sometimes with a husband and sometimes alone, she accomplished her goal, living first in Japan as an Army wife, later in Nairobi, Kenya as Secretary-Consul of the Embassy, and finally in Lyon as Consul General. Everywhere she lived, regardless of her position, she attempted to improve the situation of minorities, working within the system to create change, as well as forming connections and networks to help her achieve this.

At more than 500 pages, this book is rather lengthy, and some trimming would help keep readers interested. In addition, there are places where the amount of detail may overwhelm casual readers, especially in the many acronyms and the describing of government bureaucracy and positions. Still, Keep Getting Up is inspiring and informative, demonstrating what it takes to overcome prejudice and become an agent for change in the world.