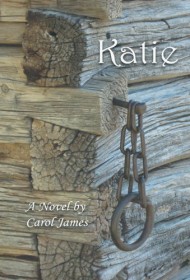 Set in the 1870’s, this episodic western for women readers is a delightful change from routine historical romance.

Katie Lawson nee Rawlings escapes the home of her abusive father only to be fooled into marrying and moving from Dodge to Denver with Phillip Lawson, a rich, powerful rancher whose nasty past with women is hinted at, but not immediately revealed. After a sadistic introduction to married sex, Katie becomes pregnant with the second pleasure of her life, William, her baby boy.

Katie’s life is confined to the home, where she encounters characters such as her obese, leering brother-in-law, Clayton, and his wife, Daria. She learns about the death of the first Mrs. Lawson and is soon horrified to discover that Phillip has bashed in her son’s head with a liquor bottle. When he tries to kill her as well, she surprises him with the fire poker through his chest.

On the run, Katie travels across country, first dressed as a young boy, until she is captured by bounty hunter Jack Burke and parked in Sheriff Justin Brandt’s jail until Burke can make arrangements for her to be returned to Denver. There, Katie finds herself drawn to the sheriff, who figures prominently into the rest of the story.

Katie is a fitting heroine. She is a strong woman with the looks and drive to survive, and her story is a page-turner, filled with action. Its flaws seem to stem from the author falling in love with her story and not wanting it to end. Some of Katie’s tribulations are duplicated in other women’s lives. The last adventure seems to take forever to end, and, in general the story structure leads to transitions that aren’t as smooth as they should be.

Despite such issues in this overly long book, this author shows much promise. She displays passion in her prose and offers a vibrant storyline that readers will appreciate, in spite of the book’s drawbacks.