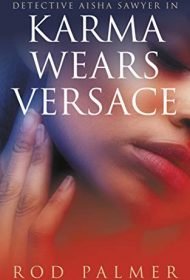 Detective Aisha Sawyer is dressed to the nines, hard-hitting, gifted with both intelligence and intuition, and street smarts to boot. Her latest cases are curious: In one, touching on the dynamic world of rap and hip-hop, local rap legend and music mogul Kendall “Trap” Miller has been found dead due to a biological agent that looks suspiciously like rabies. Simultaneously, a seemingly unconnected medical student named Meegan Appleton is on life support from the same infection.

After Aisha and her partner Jeremy Travis interview a host of thugs, hustlers, and others, two suspects emerge. Aisha’s gut tells her the murderer is Trap’s surviving fiancé Chosen, the stylish Versace-wearing diva who inherited Trap’s entertainment empire. The relationship between these two powerful women is intense, oscillating from mutual admiration to fierce rivalry, much like the frenemies found in Heat or Killing Eve.

Her partner Travis, however, suspects Dr. Edward Cofield, who has the scientific expertise and knowledge about diseases and infections to formulate a deadly biological agent—and is rumored to have been involved romantically with Meegan Appleton.

This is a cool, well-written mystery with enough literary verve to keep armchair detectives guessing right up to the cliffhanger ending. Palmer skillfully uses dialogue and the characters’ actions to move the story forward, rather than narrative exposition. This is a serious, bona fide police procedural, so readers need to pay attention to the details, but the friction between its two lead characters is electric.

The story’s only weakness is a few generic characters on both sides of the law. Certain readers may also object to some raw, albeit authentic, language.

Overall, the story’s style is as engaging as its title. Karma Wears Versace is a police procedural dressed to please.