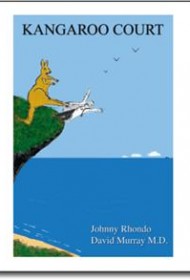 Kangaroo Court, presented as fiction based on factual occurrences, is a thinly veiled account of Dr. David Murray’s own difficult experience in the 1980s.

After working for years as a hospital pathologist, Dr. George Hill marries and decides to start a medical practice far from chaotic Los Angeles in a small northern California location called Lunar Bay City. But what initially seems like a great career shift soon turns into a nightmare. A group of E.R. doctors led by the conniving peer review chairman Dr. Ted Unzi take a series of under-handed steps to chase Hill out of town because they feel threatened by his expertise.

Hill is falsely accused of making serious medical errors and overprescribing dangerous drugs. He receives veiled threats hinting that he may be a victim of a “perfect accident” if he stays. When Hill attempts to clear his name, he finds himself up against Unzi, “the fox in charge of the hen coop,” who manipulates the situation to railroad Hill, ending his hospital privileges and putting a serious dent in his practice.

The story is told with flair and nice descriptive touches. Dr. Louise Brooks, for instance, is “a short squat taciturn lady” with a “square jaw, red plethoric face under slightly wavy brown hair…” It also is filled with footnotes clarifying medical terminology and procedures, as well as offering Hill’s rebuttals to accusations. The book concludes with a plea to abolish peer review committees and offers advice for relocating doctors who are victimized.

Overall, the book is a clear and somewhat frightening warning to others considering or already in a small town practice. It also aims to reach medical oversight boards in a plea to change rigged hospital self-policing systems. Given that its target audience appears to be those in the medical world, as well as its odd mix of factual and fictional elements and its heavy-handed agenda, this book is not recommended for general readers.