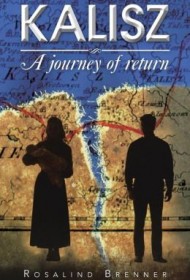 The tentacles of the Holocaust reached far beyond 1940’s Europe, as seen in this novel revolving around Sender (also called Alexendar) Berner, a man who suffers the lifelong consequences of never feeling truly secure.

Although he is one of but several children in a traditional Jewish family in early 20th century Poland, his father proclaims: “You will do me proud, my son. You’ll find the way through the Torah to live a life of freedom.” These words about freedom seem to mold Sender’s personality. Far more restless and adventurous than his siblings, he soon rejects his parents’ tradition of praying and studying, embracing new Zionist politics advocating a free Jewish state in Palestine.

When the Nazis near their village, Sender’s Zionist friends demand instant exodus from Kalisz, forbidding Sender to bid farewell to his family. As Sender (now referred to as Alexander) and his group make their arduous trip to Palestine, he realizes his idealistic view of life there was overly optimistic, given the many new challenges he faces.

The book follows his service with the British Army, reunion with his youngest brother who has escaped to Australia and marriage to an Englishwoman he meets through a friend’s influence.

Sender’s early story is absorbing, despite simplistic writing dotted with punctuation and pronoun errors and an overuse of cliches (“Kept dreams under lock and key”; “She was a sight to behold”). The author thoroughly draws readers into Jewish culture in pre-war Kalisz. But when Sender leaves Kalisz, the narrative seems to lose its sense of purpose and direction. Momentum continues to decline in the book’s final third, which revolves around Rose, a young woman who meets Sender while traveling, and includes many contrivances, such as her highly coincidental connection with the past.

Despite its early promise, the story ultimately disappoints. Readers who like historical fiction may find moments of high engagement, but other books blend the past and present much more credibly.