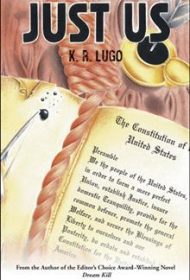 Trained attorney K.R. Lugo follows up a trio of crime novels with another tale of revenge and murder.

The novel opens in 1996 as criminal defense attorney Trent Varus is sentenced to 25 years to life in state prison for a murder he claims he did not commit. Twenty years later, Varus embarks on a journey of revenge, starting with Judge Walter Callahan, followed by lethal visits to the prosecuting attorney and even his own brother-in-law.

The cop who lands these cases is Eric Lomax, a homicide detective with all the classic iconography of the role: He’s a hard-nosed, thrice-divorced lawman with a penchant for trouble. But Lomax also struggles under the supervision of his police captain, Mike Johnson, a man with his own motivations for seeing Varus apprehended or killed.

Weirdly, Varus seems to have maintained his license to practice law following his imprisonment, a fact that isn’t explained until very late in the book. Varus’ occasional meetings with clients are generally not related to the main plot, and can be distracting sidebars. Eventually, Lugo reveals the grand conspiracy behind Varus’ situation and why he is so driven to vengeance

The overstuffed cast also includes a low-life strip joint owner, a dirty beat cop, and Varus’ personal assistant and bodyguard, who mostly serves to move the plot mechanics along. More important to the central story are Tabitha Verelli, a stripper with a heart of gold, and Dominique Cieo, a mob enforcer shadowing Varus for his own dark reasons.

This is archetypal pulp fiction with a plot that’s circuitous but serviceable and characters that play their roles according to longstanding tropes. The language the author employs can be a little florid at times, but he capably keeps readers guessing until the final denouement. It’s not a home run, but as a twisty police procedural combined with an overwrought thriller, the book succeeds more often than it falls flat.