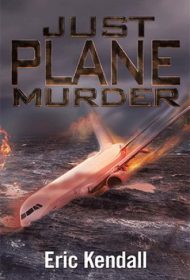 David Baxter, the CEO of NorthAm, “the largest aerospace corporation in North America,” faces a quandary. He is eager to begin using a new, fuel-efficient engine before NorthAm’s major rival. But the change would require additional training for the planes’ flight crews, a deal-breaker for NorthAm’s biggest client.

David chooses profit over compliance and instructs his underlings to hide the magnitude of the change to the planes from the FAA, obscuring the need for the additional training. This obfuscation results in two deadly plane crashes. However, David’s friendliness with the American president (known here only as POTUS) keeps NorthAm from suffering any consequences. But when POTUS runs for reelection, a powerful and angry coalition works to bring the truth to light.

The cronyism between business interests and politicians is fertile ground for a novel, but Just Plane Murder falls short of generating an engaging level of intrigue.

The novella reads more like an outline than a full-fledged story. Characters are introduced with large chunks of backstory but not given the space to come alive for readers. The story unfolds in bare-bones scenes nearly devoid of evocative descriptions or non-expository dialogue. And the conspiracy to give POTUS his just desserts is revealed so quickly there’s no chance for suspense to build.

In addition, the prose sometimes feels overwritten. For instance, one character’s rise in NorthAm’s corporate hierarchy is described as “a tough ascent, like that of a rock climber moving slowly but surely up the three thousand [sic] foot vertical face of Yosemite’s El Capitan.”

Despite its potentially gripping premise and the expertise of its author, an aviation industry veteran, Just Plane Murder needs substantial revision before it is likely to appeal to a general audience.