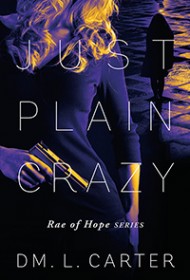 In this romantic adventure, the second in a series, the determined heroine Rae Shields becomes an FBI agent in order to take down the Cabani mob and their rival gang.

Readers learn that Rae was an ordinary insurance agent until she became a witness to mob activity. After the mob put out a hit on her, she was saved by the boyishly handsome Tyler Blaze, an undercover FBI agent embedded with the mob. Rae and Tyler are now a couple.

When Rae explains her plan to shut down the mob enterprises to Tyler’s attractive FBI boss, Stephen Moix, Moix fast-tracks Rae as an FBI agent so that she can learn to handle herself in dangerous situations. Along the way, there are romantic misunderstandings, erotica and a new normal: Rae finds that she likes her FBI career.

Author DM. L. Carter includes elements similar to the popular Janet Evanovich novels —a plucky heroine and exploding cars, for example — but Just Plain Crazy has more graphic sex and less polish. Rae is a likeable enough heroine, with an engaging backstory, but her character is uneven; sometimes she seems as merciless as the mob killers; other times, she’s empathetic and guilt-ridden.

The author skims over Rae’s unrealistic plan to shut down all of the mob’s enterprises, some located overseas, concentrating on the action, perhaps so that readers don’t look too hard at the big picture. There are also many bothersome minor mistakes; for example, Rae calls two of her fellow agents “Popeye” and “Bluto”, to her “Olive Oil” (which should be “Olive Oyl”).

Still, the story hums along, filled with a full slate of action, plenty of sex, and even some romantic fun, as Tyler and Moix vie for Rae’s affections. Fans of romantic adventures who like to “just go with it,” will probably delight in Carter’s spunky heroine.