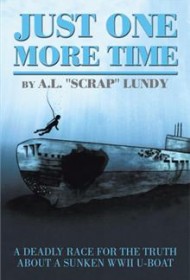 Avid diving enthusiast A.L. “Scrap” Lundy brings a lifetime’s worth of real-world diving and military experience to his first thriller, which follows up earlier books about California’s Cannery Row and the California Abalone. Here, the author crafts an engaging adventure to rival the likes of Clive Cussler about the search for a missing WWII submarine and its dangerous cargo.

The novel opens in 1944 as cutting-edge German U-boat, U-2601, is assigned a secret mission to bring canisters of mercury to its Japanese allies on Penang Island, Malaysia, but is sunk by a torpedo. The story then jumps to present-day Santa Barbara where 70-something semi-retiree Lars Larsen is itching for a new adventure. Larsen wins a lucrative research contract from the Sea Ventures Institute to search for U-2601 and assembles a crew of salty sea dogs.

The team soon discovers that its benefactor is also working with the U.S. military to search for sunken weapons like those on U-2601 in order to prevent terrorists from obtaining them, adding a Tom Clancy-like angle to the story. As the expert divers locate the U-boat and salvage the German payload, an al-Qaida terrorist infiltrates the crew and trouble ensues.

The story’s tone feels a bit jingoistic due to the generic nature of the Muslim extremists the author shoehorns into his story. While they present a threat drawn from real life, their portrayal here is largely formulaic; as proper villains go, they serve more as plot device than palpable menace. Counteracting this misstep, however, is Lundy’s excellent cast of misfit heroes who banter with ease and carry nicknames like “The Chief,” “Cowboy,” and “Lifeguard.” Lundy also nails the mechanics of diving salvage with passages that show the risk and complexity of the trade without dissolving into technical mumbo-jumbo.

Overall, readers who can forgive some xenophobia in the book’s formulaic bad guys will find that Just One More Time delivers a lively and entertaining ocean-faring adventure.