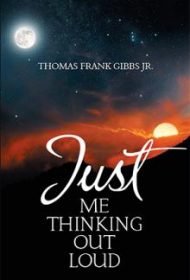 Just Me Thinking Out Loud by Thomas Frank Gibbs, Jr. is a collection of poems that meanders through one’s man’s life and reflections on topics that touch us all, such as love, fate, world issues, and personal sorrow.

The book is a series of poems without sections and many of the titles espouse skepticism and some measure of defensiveness, such as “But, For How Long?” “People Who are Plastic,” “I’m not Gonna be Your Fool,” and “Don’t Blame Me.”

Gibbs’s poem “Which Side Are You On?” is addressed to an unnamed other who is frustrating the narrator with his/her equivocating: “You’ll finally end it all by playing against yourself./ With your false talk and fake grin,/ You’ll get yours in the end.” This admonishing tone can be found throughout the volume.

Some pieces in Just Me Thinking Out Loud sacrifice originality for fidelity to a rhyme scheme that forces awkward diction, such as “Dreams are Plentiful,” which begins: “To put ones’ [sic] hope in their fondest dreams,/ Upon this quest they plot and scheme.” Poems like this are too vague, and use an old-fashioned approach (“fondest,” “quest,” “inner souls”) instead of fresh imagery or vivid details.

The most engaging poems are those most grounded in the sensual and idiosyncratic world of the narrator, such as “The Gibbs and Sister Bon,” which begins: “Wednesday night is our favored time/ … / Usually salad, potatoes and steak,/ … / While smoking our cigarettes to the very brim.” There aren’t enough poems like this in the collection, where readers can experience something grounded in a specific place and time.

The author was born in 1945, according to the book jacket. Poems such as “Hurry Up Death” and “Faith in Hope” may make the collection more appealing to those in his generation or in a reflective mood—one that includes contemplating mortality and the inescapable nature of fate.