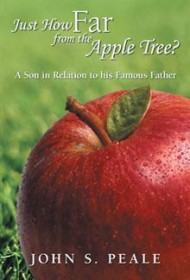 This is a book for anyone who has lived under the shadow of a famous parent. In this case, John Peale, the only son of the late preacher and writer Norman Vincent Peale, endured a lifetime of emotional angst over his complex relationship with his father.

The tension began with the enormous success of Norman Vincent Peale’s The Power of Positive Thinking (published in 1952), which held steady on The New York Times bestseller list and catapulted Peale into audiences of adoring politicians, celebrities and world leaders. At the time, John Peale was in middle school, longing for the father who was now too busy to attend to his children. “I felt repelled, as I realized how self-absorbed and self-important he had become.” And yet, it is clear that the son still worshipped and sought his father’s love.

Readers see how John Peale struggles. He drinks until he passes out, is diagnosed with three different cancers over a decade, and has problems with his gall bladder, heart and weight. All of this is hastily told, in general brush strokes. The author would have been better served showing more and telling less, particularly avoiding mundane expressions like “our family life is settled and creative and fun.”

Sentence construction is awkward from the Introduction on: “Another major focus is my becoming, my psychological and spiritual development to what I am today.” In addition, the story has no narrative arc; the book isn’t told chronologically nor is it structured in any meaningful way. This makes for a repetitive and confusing read.

Interestingly, the style shifts once John Peale commits to a life of recovery in a Twelve Step program. Peale loosens up on the page, exploring his humility, powerlessness and faith for himself. He comes to a place of acceptance with his father because he is finally able to step into his own life. We wish he held this note longer.

BlueInk Heads Up: Despite the unstructured, redundant read, the book will hold interest for followers of Norman Vincent Peale and for children of well-known parents.