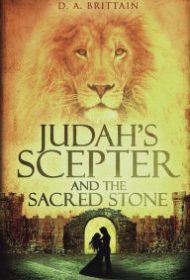 The popularity of books featuring stalwart princes, charming princesses, and tales of derring-do never wanes, and D.A. Brittain has produced an admirable one in Judah’s Scepter and the Sacred Stone.

Taking her cue from fables of how a stone that served as a pillow for biblical great Jacob traveled from the Middle East to the British Isles and became an integral part of Great Britain’s coronation ceremonies, the author has concocted a plausible tale, although she makes no claim that her story is a true reflection of history.

The story begins with Princess Teia of Judah, soon after the Babylonian incursion of Jerusalem in 586 BC. Under the protection of the prophet Jeremiah, Teia encounters a handsome prince from the far off land of Erin (present day Ireland). Teia and the prince, Eochaid, must part ways— and thus begins the tale.

Eochaid returns home and takes up his royal duties, re-evaluating some of them, such as human sacrifice, after having met with the wise prophet. Teia, meanwhile, travels with her guardian. As she moves to Egypt, then sails across the ocean encountering pirates and predicaments along the way, she transforms from a frightened teenager to a resilient young woman. On the journey, Jeremiah protects not only the princess on the journey, but also the sacred coronation stone, which eventually figures in Eochaid’s reign of Erin.

Brittain easily portrays the sights, sounds, and smells of the era, and readers quickly slip into the story. Her careful research is evident, and, although the tale takes its cue from biblical incidents, she steers clear of the trap of proselytizing during the narrative of the bygone times.

Readers who enjoy a story filled with adventure, heroism and a dollop of romance will definitely find it here. All in all, this is a welcome first novel from an author to watch— one who promises more historical titles to come.

Also available as paperback and ebook.