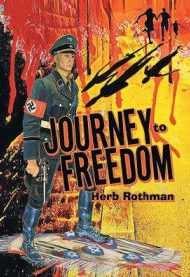 Herb Rothman’s historical novel, Journey to Freedom, is dedicated to his parents, Julius and Sara Rothman, who survived Nazi Germany. Based closely on their lives in Germany and America, the book illuminates the Jewish people’s struggle to stay true to their faith despite rising persecution.

The novel opens with the birth of Yehuda Roitmentz in Altona, Germany in 1912. The first half focuses on the years leading up to Yehuda’s bar mitzvah, with religious rituals marking the passing of time. Rothman gives plentiful details about the sacred stories, feasts, and rites that typify the Jewish faith. The liturgical year creates a solid rhythm for the characters’ lives. However, long explanatory passages—such as two pages about the bris ceremony—break up the narrative flow and sometimes make this more like an anthropological study; the same is true of the extensive glossary of Hebrew terms at book’s end.

Wars and mounting anti-Semitism create palpable tension. Hershel, Yehuda’s father, owns a clothing factory and fights in WWI, while Yehuda and his best friend Mordechai tussle with playground bullies after being called “dirty Jews.” As a young man, Yehuda participates in resistance against the Nazis and is arrested by the Gestapo. Mordechai must undertake a dangerous rescue mission—one of the book’s highlights.

Having lingered over Yehuda’s childhood and coming of age, the story speeds up dramatically to cover another 20-plus years of German and American history. This occasionally requires sweeping summary statements, like “Between 1933 and 1938, Jewish-owned businesses endured significant pressure.” The novel is more successful when it translates the broad movements of history into personal scenes, such as Yehuda and Mordechai’s arrival at Ellis Island with their families.

Although its insertion of historical context is not always fluid, readers may appreciate its  strong sense of the Jewish experience in WWI and WWII.