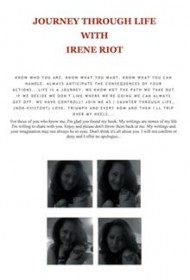 In this brief book, physician and mother Irene Riot shares poems, photographs, and stories that explore timeless themes of love, heartbreak, and resilience.

Journey Through Life has eleven sections; most of the poetry sections have four poems each, while the story section includes seven short prose pieces. The majority of poems are shorter than one page, structured into four-line stanzas made up of two rhyming couplets. Riot’s diction is simple, leaning on orthodox natural imagery, as in the poem “On Borrowed Time,” in which the speaker claims: “Life was fine before I met you / The daily grind I always got through / I saw grey skies, felt the sun shine / Then I chanced upon your smile.”

The most distinctive language and stories are in poems about the body and specific relationships, as in “My Nephew,” in which the boy is described as, “Same blood from a different womb / Different flock with the same plume.” In the poem “Tainted Lotus,” Riot uses the lotus as a metaphor for the fragile connection between doctor and meth-addicted patient, “Tainted lotus you smile at me / Feed me lies I pretend to believe / Away you float, you are a lost soul / You’ll sink in the mud when I let you go.”

Riot’s engaging, suspenseful prose pieces are about modern Filipino characters and vividly narrate fast-paced, realistic vignettes about a young boy’s typhoid fever incident, a supernatural visitation, and a Oujia board. The book also includes snapshots of the author, her daughter, and nephew.

Riot’s poetry contains too many clichÃ©s for it to be called “accomplished” (i.e.: “Your soft touch soothes my soul”; “Chase away the dark clouds,” and so on), but readers, especially mothers, looking to see their own raw emotions mirrored on the page may find a kindred spirit in these pages.