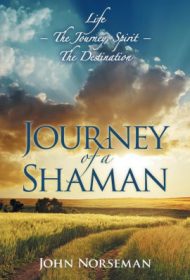 This memoir of one man’s life reveals the many times he believes the Universe – aka Spirit – took the lead and directed his way.

A native of Britain, John Norseman was born at the height of Germany’s blitzkrieg of London, surviving a “doodlebug” attack – V-1 rockets – thanks to his mother’s courage. Training for the Royal Navy, he had to climb a towering mast despite a crippling fear of heights, which taught him that the only blocks to achievement were in his own mind.

During his time as an executive stationed in Australia and New Zealand, he encountered a Maori woman who recognized him as a kahuna, or shaman. He also met his soulmate, Carly, for whom he left his wife and children and embarked with Carly for a life on the high seas.

They rechristened themselves Lana (John) and Fringe (Carly) to celebrate their spiritual growth. Time and again, they were guided at sea by Spirit through near-fatal storms and into beautiful harbors. When his soulmate dies and “leaves this realm,” the author writes that “Miraculously, Fringe’s soul had left her physical body and combined with Lana’s soul, within Lana’s physical body—irreversibly.”

These spiritual highlights from a shaman’s journey are mined from a dense narrative covering the mundane details of managing a business, carrying on romantic affairs and seafaring. Most of the book is told in the third person using the quaint tone of a WWII-era newsreel voiceover: “What follows now is what John experienced from VE Day through the ensuing period of change in Britain as described above until 1968, when he was twenty-seven.”

Seekers looking for more specifics about the development and traditional work of a shaman – divination and healing, for example – won’t find much here. Still, the author’s childhood and career might intrigue readers of his generation, and his vivid accounts of sailing will satisfy avid sailors.