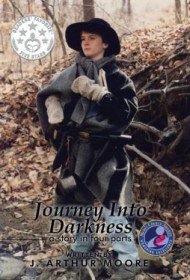 At the outset of the tale, ten-year-old Duane Kinkade’s father enlists in the Confederate army, and when raiders kill the boy’s mother, he is left on his own. His search for his father takes Duane into battle at Shiloh, where he’s wounded then rescued by a Union doctor. The fact that the boy moves from Confederate to Union forces several times throughout the book seems improbable, but Moore’s work is otherwise so well researched that readers will believe it was possible.

Duane’s shifting perspective underscores war’s dreadful toll on all combatants. The boy is blinded while serving with the Confederacy at Gettysburg. Back with the Union in the final section, he endures the deaths of two friends, just kids like himself.

“War does thin’s ta ya,” Duane says in a passage characteristic both of Moore’s less-than-subtle use of dialect and the novel’s fundamental power. “It makes ya kill when ya really ain’t wantin’ naturely ta do it. It’s a horror ya cain’t b’lieve really happens.” Moore’s central point, that war is hell and everyone longs for peace, is underscored in a poignant scene where a Federal band, playing within earshot of the Confederate army encamped across the river, begins with John Brown’s Body but also plays Dixie; as it closes with Home Sweet Home, “tears ran unchecked down the cheeks of a hundred thousand [sic] men and boys.”

Heartfelt and affecting, written in plain prose that suits its young protagonist, this sad story poignantly drives home the human cost of war.

Blue Ink Heads-Up: This novel is especially appropriate for middle-school readers and could serve as a valuable supplement to their history classes, since they might not realize that kids their age fought in the Civil War. The solid research and gripping battle scenes will engage adult Civil War buffs. Readers should also note that the narrative contains minor copyediting errors throughout.