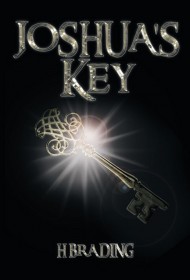 Joshua’s Key by H. Brading is a Welsh-inspired epic about the Seatons, a family who have gills behind their ears and a relationship with fantastical creatures such as rock men, Amazon-style warriors, witches, warlocks, and talking owls. Charged with rescuing the Key of Life, they must do battle against the Darkness, a force that creates despair and madness in men. Able to breathe underwater, the Seatons—namely, Joshua and his father Raymond—are uniquely able to travel to Morfa, a land beneath the sea, where the Key has been taken in the hopes of restoring light to the world and to the Garden of Eden.

Though the Welsh flavor of Joshua’s Key might sound interesting to those who enjoy epic fantasy, Brading’s novel is too deeply flawed to provide much enjoyment to the average reader. Even overlooking the stock characters and flat plot, the novel is difficult to read on a technical level. It is riddled with typographical, spelling and punctuation errors, leading to sentences such as this: “Yes peoples pets had become unexplainably vicious and even some of the lives stock seemed agitated it was quite bazaar.”

Not only is punctuation largely ignored throughout the massive, 565-page book, so is any evocative description, making it impossible for the reader to orient him- or herself within the world of the book. For example, Brading writes: “He found a sturdy branch he could use this as a club, he moved deeper in to the marsh or was it a forest he couldn’t tell.”

While Joshua’s Key is an honest effort and Brading’s love of epic fantasy clear, her hard work is obscured by overwhelming technical flaws.