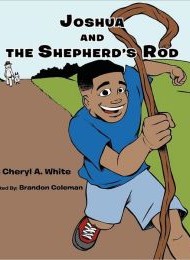 In this children’s picture book, the author borrows heavily from Jack and the Beanstalk to tell a story of Christian faith.

When Joshua’s goat, his family’s only source of income, stops giving milk, he decides to sell the animal at the local market. On his way there, Joshua meets an old, well-dressed man. The man strikes a bargain with Joshua – his staff for the goat. Joshua’s mother is dismayed but she forgives him and the two pray together before bed.

In the middle of the night, Joshua wakes to find that the rod has grown all the way through the clouds. He climbs it and finds himself inside a mansion decorated in expensive fabrics and jewels. Frightened by the sound of footsteps, he hides under a table—only to hear the voice of God speaking to him. God promises him riches as a reward for the faithfulness that Joshua and his mother have shown over the years. When Joshua returns home, gemstones rain from the sky.

Without the complicating character of Jack’s giant, the story is not nearly as scary as the original Jack and the Beanstalk, perhaps making it even more suitable for very young readers—but it also take away the excitement central to the original fable. The story lacks a true climax, especially for readers familiar with the original fable.
In addition, while this story might appeal to families seeking to provide examples of the benefits of Christian devotion, it also oversimplifies both trials of faith and rewards for perseverance.

Ultimately, this story is a straightforward, if simplistic, lesson in Christian faith, but it could be used to help parents introduce larger conversations about God.