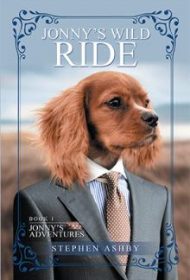 This science fiction/erotica novel by Stephen Ashby tells the tale of pilot/adventurer Jonny and his sentient canine companion, Deefer.

Jonny (also spelled “Jonnie”) has fled the Earthen confederation with a fleet of ships, which he sells to the Mondor Star Kingdom.  He then proceeds to have numerous sexual encounters with hookers, fleet sergeants, etc., often more than one at a time. His dog, Deefer, acts as his sidekick throughout.

Jonny is profane, sometimes a bit funny, but there’s not much of a plot here. Most of the book is about sex. The sexual comes across as mundane and crass, with descriptions like “a quick round of hide the sausage”; “I flipped her on her back [sic] buried my face in the giants and Mr Happy in her magic fun place”; “with Mr Happy nestled between her taught [sic] (expletive) cheeks,” or “I pointed at my groin [sic] she took the hint.”

As seen above, the book is also marred by numerous punctuation, capitalization, spelling and even spacing errors (spaces missing between words is common). Also, sometimes the wrong words are used; for example, “there” is often used for “their.”

Perhaps the biggest problem here is that one of the hookers Jonny has sex with is not a woman, but a girl.  “I picked up my naked twelve year old and carried her down for lunch. With naked Natasha on my lap with her head tucked into my shoulder and her thumb in her mouth, I guess she was practicing for when she went back to work, I picked at my lunch with one hand, no prizes for guessing what the other one was up to.”  That particular encounter only becomes more unsettling as it evolves, given the character’s age.

Many readers will be disgusted by the casual presentation of pedophilia; others will be dismayed by the punctuation, capitalization and spelling errors. The occasional humor is unlikely to make up for either of these serious shortcomings.