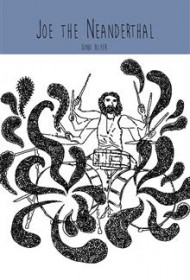 Rock drummer (and self-proclaimed Neanderthal) Joe Meyers narrates the first part of the story. Joe is on the run from his homicidal sister, Meghan (who wants their inheritance to herself), and a rogue doctor (who’s interested in Joe’s allegedly Neanderthal DNA), when he stumbles into a shoot for a reality TV show on the Jersey Shore centering on the band Babies in Bars. As luck would have it, they need a drummer.

The plot of Joe the Neanderthal grows more complicated from there. Joe cultivates an uneasy friendship with Ben, the band’s bassist-by-night and scientist-by-day, who is working to perfect a life-like android. Then he has a steamy affair with Ben’s wife, Sunita and eventually forges an alliance with his own would-be hitman, Bill, to get the upper hand against Meghan. And just to gild the lily, he meets a pair of beautiful extraterrestrial women who ply him with sex and heroin while taking over narration duties from Joe as we head toward a scattered conclusion.

Joe’s Neanderthal status is intended as literal (not metaphorical), but it creates narrative confusion. For example, is Meghan a Neanderthal? Why not? And his hiding out by signing up for a TV show seems destined to backfire. Additionally, the motivations of Meghan and Sunita are confusing, and it’s never clear how Joe wins over Bill (it seems to take place when he plays a drum solo that leads to an extensive flashback the hitman finds endearing; but the mechanics of how this is all conveyed to Bill are exceedingly puzzling). And the aliens seem to have virtually nothing to do with the larger plot.

Ultimately, the narrative falls flat under the weight of these disparate and confusing elements. While Joe the Neanderthal has an engaging narrator, originality, and moments of memorable prose, overall it never finds its rhythm.