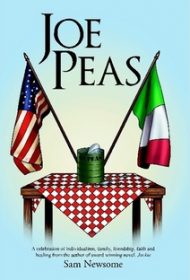 An enigmatic Italian makes a lasting impression on a small-town community medical center, stirring up a slew of unanswered questions in this sweet-natured story.

Dr. James King has his hands full: As if constant nagging about home upkeep from an overbearing condominium association chair weren’t enough, King’s Mill Medical Center, the facility he founded in North Carolina, has been struggling to keep up with the times. A lack of resources threatens to shutter the doors, but the center hobbles along on generous doses of goodwill and professional sacrifice.

Joe Peas, an American with a thick Italian accent, is admitted for a knee injury; long before this, he had already wormed his way into Dr. King’s heart with unabashed charm. A talented house painter, Joe quickly befriends the long-term patients at the center, too, but Dr. King notices that he is hiding something behind an outward veneer of easy banter. The waters become even murkier when Joe mysteriously departs the center one day, leaving no trace of his whereabouts.

Episodic dives into Joe’s past — a stint in the Vietnam war, his work as a painter — attempt to help readers piece the puzzle together but leave large parts of the picture unfinished: What happened to Joe and his platoon during the war? What career in the arts did he bring an end to and why? Joe emerges as a slightly underbaked character: Apart from his heavy accent and roguish charm, he doesn’t provide much on which to hang a story, which results in readers feeling less invested in Joe’s final outcome. While details about the center’s challenges, its residents’ lives, and even the small town’s history add variety to the narrative, one wishes for a little more depth here since they’re generally skimmed over to refocus the spotlight on the enigmatic Joe.

Despite such issues with execution, this is a warmhearted story with good intentions. While many will wish for more, those who appreciate such qualities will find rewards here.