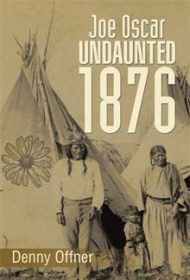 There’s no plot, as such, as the story continues, but rather a series of adventures with the characters joining Custer as he stumbles toward Little Big Horn, and then meeting Wild Bill Hickok in lawless Deadwood, South Dakota.

Throughout, Joe is a Gump-like figure, encountering not only Custer and Hickok but also Wyatt Earp and Quanah Parker, and Offner skillfully renders the Garden of Eden that was the southern plains, rich with wildlife and unending vistas. Easily read, with short chapters written in plain language, his story is hampered only by anachronisms (cowboys with “athletic” builds and characters who say “I have your back”) and repetition of descriptions (many eyes are “piercing”). Also, while Offner’s empathetic treatment of Native Americans hits the mark, some will feel he overlooks too many real-life characters’ flaws, Earp’s and Custer’s especially.

Such issues aside, Offner knows weapons, horses, and the ramifications of historical events and offers well-researched descriptions of men sleeping under the stars or living on the raw edge of survival in towns like Deadwood. While Offner’s Joe Oscar isn’t epic, like Lonesome Dove or True Grit, it’s a readable western adventure that fans of the genre will enjoy.