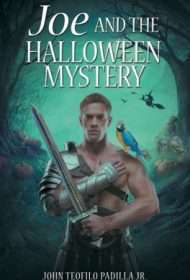 In Joe and the Halloween Mystery, John Teofilo Padilla Jr. weaves a path of gruesome violence as his God-anointed protagonist wages war against a host of demons.

The eponymous Joe is a human man selected by God to act as an archangel. Joe strives to protect the righteous with his holy sword and his faithful celestial parrot, Herbie. He vanquishes demons, zombies and various others of Satan’s minions in his hometown of Beverly Hills; in Mexico on the Day of the Dead; in London, where he is a royal knight; in the Vatican, as the Pope’s right-hand man; and on Halloween Island somewhere in the Bermuda triangle.

Unfortunately, amid the fantasy gore lie problems that, even in the genre, strain credulity. Samuel Taylor Coleridge coined the term “willing suspension of disbelief” as a requirement for fantasy in literature. At no time is this suspension possible in Padilla’s novel, as none of Joe’s adventures is even remotely believable.

For example: Joe travels by yacht from San Diego to the Bermuda Triangle in less than a day; a centuries-lost book is located in the Vatican library in a matter of minutes; most of the good guys graphically slaughtered by the forces of evil have time for a quick Bible verse before they die; and even the parrot has a pretty good grasp of the Old Testament.

One positive note might be the author’s knowledge of languages. Phrases in at least a dozen languages are interspersed through the book, each followed by a translation. The aim of this homage to the Tower of Babel is never made clear, and the “Halloween mystery” of the title is left vague and unfulfilled.

Perhaps the purpose of the novel is religious allegory, but there is no clear winner in the battle of good against evil. Anyone who reads the book will simply be left to wonder about it all.